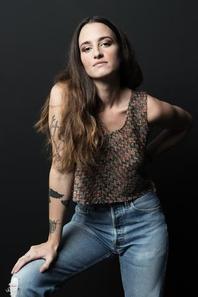 Alex Powers is an American stand-up comedian, actress, and writer from Baltimore, MD. Her stand-up has been characterized as edgy, unpredictable, and remarkably smart. Alex has performed regularly with Carlos Mencia (HBO, Comedy Central) and Pablo Francisco (MADtv, The Tonight Show) all over North America, from The Improv in Hollywood to Gotham Comedy Club in New York City. Alex has also performed with Russell Peters, Jeff Garlin, Bobby Lee, Brad Williams, Jamie Kennedy, Maria Bamford, and Bobcat Goldthwait to name a few. She was a finalist for the 2016 Martin Grant and, in 2017, she appeared on season 3 of Laughs in a total of two episodes. They originally aired on FOX before becoming available on Hulu. Later that year, a compilation of her stand-up (Try Not To Laugh: Alex Powers) was released on Amazon. Alex moved to Los Angeles, CA in 2012 and now resides there with her dog and cat. She has starred in several short films and web series while performing stand-up all over the United States and most recently in Israel.
Share onTwitter Share onFacebook Which celebrites shareYour Birthday