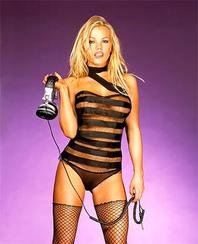 Delectable 5' 2" blonde bombshell Colleen Shannon was born on April 14, 1978 in Pelican, Alaska. She's of half Irish and half Swedish descent. Shannon grew up on Pelican Island in Alaska. Colleen moved to California at age sixteen and attended Independence High School in El Dorado county. She was already established as a top DJ in Los Angeles clubs when she was chosen out of nearly 10,000 applicants to be the 50th Anniversary Playmate in the January, 2004 issue of "Playboy." Shannon has appeared in several "Playboy" videos and was featured as herself in the reality TV series "Celebrity Love Island." Colleen has popped up in music videos for such groups as Blues Traveler, Smashmouth, and Crazy Town. Among the artists she's shared the stage with are Sting, Snoop Dog, Fat Joe, and Lloyd Banks. Shannon has graced the covers of such publications as "Mum," "In," and "Super Street." Moreover, Shannon has been featured in a bunch of magazines that include "Maxim," "Zoo," "OK," and "Loaded." She's a spokesperson for the high-end dating website Babes and Billionaires and has appeared in TV commercials for everything from Bacardi to AT&T. Colleen has acting roles in the movies "Miss Cast Away," "Sci-Fighter," and "The Passing." Shannon lives in Hollywood, California and continues to work as a DJ all over the world.
Share onTwitter Share onFacebook Which celebrites shareYour Birthday