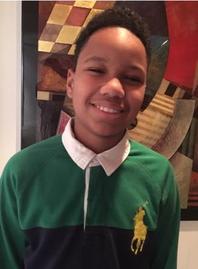 Courtlen Hale II was born on July 10, 2004. He lives with his parents (Courtlen and Gretchen Hale) in Southfield, Michigan. Courtlen's older sister Val Howard, also a model/actress signed him up with the agent for future acting opportunities. He received a call to audition for a commercial for a company in the Flint, MI area. A few months later he was contacted for an exciting opportunity to audition for the role of "Emmett Campbell" in the sixth episode of "Detroit 1-8-7" titled, "Lost Child / Murder 101", scheduled to air on 10/26/2010. He landed it! This was a non-speaking role where he appears with his t.v. parents "Kori and Shaun Campbell" who illegally adopted "Emmett" through a former foster care worker. The family is excited that Courtlen landed his first major audition. He also completed three commercials for Detroit Public T.V. Courtlen is very energetic, and has a big personality and imagination! Courtlen also enjoys reading, playing soccer and video games, learning keyboard from dad (Courtlen Hale saxophone player of "Chapter 8" band), watching "SpongeBob", "Big Time Rush" along with other fun television shows, and a bunch of other fun activities with family and friends!
Share onTwitter Share onFacebook Which celebrites shareYour Birthday