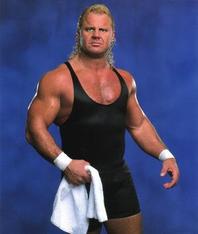 Curt Hennig was born in Pittsburgh, Pennsylvania as the son of one of wrestlings all time legends - Larry Hennig - Aka Larry The Ax Hennig. Curtbegan training to follow in his fathers footsteps when he was just 12 years old. Starting off in the AWA - Curt began his career as a tag team wrestler. He won the AWA Tag Team Championship with Scott Hall before concentrating on a singles career in the AWA. He became the AWA Heavyweight Champion in only his second year with the company before capturing the attention of the WWF. The WWF was looking to acquire the services of second generation stars and Curt Hennig fitted the bill perfectly. He made his debut in the WWF in 1988 as "MR.PERFECT". Curt's character was an instant hit with WWF fans and he quickly established himself as a quality technical wrestler. Fellow second generation WWF star and one of Curt's closest friends - Bret Hart aka Bret The Hitman Hart was also making waves in the WWF along the same time. Bret Hart and Curt Hennig began a legendary feud that would end in an Intercontinental Championship match at SummerSlam in 1992. Curt Hennig defended his WWF Intercontinental Title against Bret Hart at SummerSlam to end what had become a captivating feud between two of the best technical wrestlers in WWF history. However, Curt had suffered a serious back injury during a house show just prior to the big event. Against doctors orders, Curt Hennig made his way to the ring as Mr.Perfect and defended his Intercontinental Title at SummerSlam against the Hitman Bret Hart. Bret went on to win the match but was full of praise for his friend and opponent afterwards. Hart called Hennig "the best wrestler and one of the best workers he had ever worked with". Despite being praised for working a high profile match through a serious injury - Curt ended up paying a price. Curt's back injury had been aggravated and that caused him major problems in the future. After taking a few months of to rest his injury, Curt returned to the WWF, however his return was short lived as his back once again flared up in late 1993. As a result, Curt was out of the ring until 1996. During that period, Curt worked as a commentator for the WWF until his contract expired at the end of 1995. By this time, Curt's back had healed enough for him to consider a return to a WWF or WCW ring. Understanding the importance of having an Impact Player like Curt Hennig on their roster, WCW got involved in a bidding war for Mr.Perfect's services. In the end, WCW won and Curt Hennig signed a 4 year contract with WCW. Hennig returned to the ring for the first time in 3 years and in only his second official singles match since his return - Curt won the WCW United States Championship. He held the title on three seperate occasions along with the WCW Tag Team Championship. However, his talents were being wasted in WCW and at the end of his contract in 2000, Curt decided against signing an extention with the company and proceeded to take a break from the sport altogether. In 2001, he returned to the ring with XWF and made appearances in Australia with the WWA. While these appearances were good enough as a stop-gap measure, Curt was hoping to make a comeback in the World Wrestling Federation - and sure enough the WWF contacted Curt Hennig to make his return to the WWF as Mr.Perfect in the 2002 Royal Rumble. What was initially billed as a one time arrangement, resulted in Curt Hennig once again re-joining the WWF after signing a long term contract. While Curt may have claimed to be perfect inside the ring, his life outside the ring was anything but perfect. In May 2002,he was fired by Vince McMahon after getting into a fight with Brock Lesnar on a charter flight. On February 10, 2003, he was found dead in a Tampa hotel. He was slated to wrestle on an independent card headed by Jimmy Hart at the Florida State Fair. The cause of death was later found to be acute cocaine intoxication. He left behind his wife of 20 years, Leonice, and four children.
Share onTwitter Share onFacebook Which celebrites shareYour Birthday