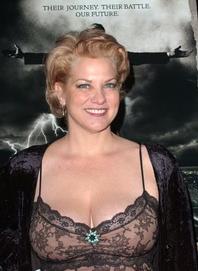 Cynthia Ettinger was born on April 18, 1954 in Edwards Air Force Base, California. She has been a member of "The Actors' Gang" for nearly thirty years and serves as the company's Co-Artistic Director and Master Teacher. Her first film appearance was in "Martians, Go Home". Cynthia has directed numerous plays during the company's thirty-five-year history, including five recent Shakespeare adaptations presented as part of the company's Free Shakespeare in the Park for family-oriented program, using Shakespeare to inspire and entertain over ten thousand children and adults. Her most notable film appearance is in "Silence of the Lambs". Cynthia has been performing in many productions with The Actors' Gang which include "The Seagull", "Mephisto", "Self-Defense", "Red Noses", and "Carnage: A Comedy". She once auditioned for the role of Martha Kent for a pilot of the television series "Smallville", but ultimately lost it to Annette O'Toole.
Share onTwitter Share onFacebook Which celebrites shareYour Birthday