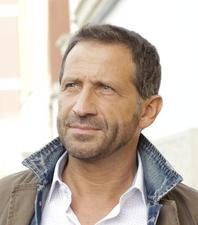 Daniele Marcheggiani is an Italian-Swiss actor, born in Davos (Switzerland). He trained at the Actor Zone Studio of Acting in Milan, followed by the actor coach Alberto Viola. He perfected at the EG Actors Lab in Rome with the coach Gianluca Testa and other acting coaches like Patrizia De Santis, Barbara Enrichi ("David di Donatello" award), the director Federico Moccia and with Luca Ward (Italian voice of Russell Crowe, Keanu Reeves ...) at the National Academy of the voice. In 2017, he debuted in "Rimmel", a pilot episode of a TV series. He took part in several films and short films, as leading actor in "Like the shadow in the dark" by Alessandro Gessaga, "The prisoner's strategy" by Gianluca Testa, "The melody of War" by Francesco Castagnino, "The Marriage" by Alessandro Urbinati, "The dream is destiny" of Sofia Fioranelli and "Map to the Stars" by Federica Crippa, co-leading actor in the role of detective in "White Noise" by Gabriele Fortuna and "The original Sin" by Nicolò Novara. He also played secondary roles as a father in "Grace and the Hikikomori" by Patrick Parkietny, a prosecutor in "Art. 640" by Matteo Ballarati, a doctor in "Drones" of Jari Brontesi, a restaurant manager in the TV series "Balla", with Andrea Scarduzio and rapper Giaime directed by Stefano Melo, a father in "The future is mine" by Luca Barera. In the film "Road to hell" by Roberto D'Antona he played the role of a special agent. He also played special roles such as Uroboro in "Tempus Edax Rerum" by Alessandro Gessaga, the circus in "Convivium" by Arianna Casati.
Share onTwitter Share onFacebook Which celebrites shareYour Birthday