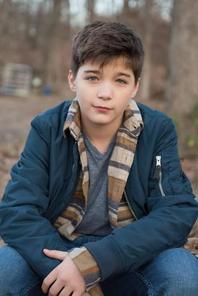 Drew began begging to be an actor and model at the young age of 4 years old. Despite being told, "No", for years by his parents, he did not back down. Being in front of the camera and an audience, has always been his dream, and he intended never to stop pressuring his parents until they acquiesced. He "won" this battle in June of 2014 and has not stopped enjoying each and every moment since. Most recently, he appeared in the 'coming of age' feature film, Rockaway, and is starring as the middle brother, Dash, in the new Amazon Studios comedy, The Dangerous Book for Boys. Early on in his career, he has succeeded in four national commercials, including First Niagara Bank, the NFL/ABC, the GAP, and Marie Callenders. He has also showed his early acting skills in a documentary TV series, (2) student films, a short film (Spit (2017)), a theatrical debut in an off-Broadway play, The Weak Ones, and a prime-time TV debut on the television series Blindspot (2015). All of this while juggling his time as a competitive dancer (he earned a 1st place Title in a petite trio for his hip-hop routine at Legacy LI Dance Competition), an intellectually gifted student, earning a perfect NYSSMA score on tenor saxophone, and his love for baseball. He has "wowed" every director and producer he has worked with during his early years with his natural ease, his maturity beyond his years, and his professionalism on set. He is continuing to improve his acting skills with workshops at the Performing Option, The Actor's garage, and through private sessions. He is very much looking forward to continue to break into the TV and film industry and show them what he's got!
Share onTwitter Share onFacebook Which celebrites shareYour Birthday