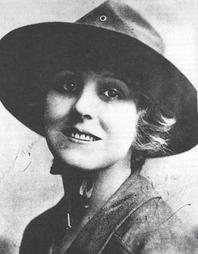 Edith Johnson's combination of luck and beauty ensured her a Hollywood career. The luck occurred because of her growing up in Rochester, New York, the home of the Eastman Kodak Co. Her beauty resulted in her being appointed by Kodak as "The Kodak Girl," with her face appearing in virtually all of the newspapers and magazines of the day in Kodak advertisements, leading her to be called "the most photographed girl in the world"--and all before she finished college. Her celebrity resulted in her being offered a film contract by the Selig Co., which she accepted as soon as she graduated from Vassar. Her first few films were with actor William Duncan, whom she eventually married, and after several more films for Selig, she jumped ship to Universal in 1916. Her two-year stay there ended when she moved to Vitagraph. She began making serials with her husband, who both starred in and directed them, for Vitagraph and then Universal again. The films were enormously successful, but Duncan and Johnson chafed under the heavy-handed administration at Universal, and they retired after their last film for the studio, 1924's "Wolves of the North." They had a vaudeville act together for a while, then settled down to the task of raising their family. Duncan took on several film roles later in life, most notably as Hopalong Cassidy's sidekick "Buck Peters", but his wife had no desire to return to films, and didn't. She outlived her husband by eight years, and died in 1969.
Share onTwitter Share onFacebook Which celebrites shareYour Birthday