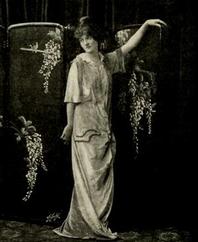 Eleanor Woodruff was born September 21, 1891, probably in Towanda, Bradford County, Pennsylvania to George (1863-1937) and Harriet Woodruff (1867-1959). Her father, of Scottish ancestry on his mother's side, was a grocer in Towanda in 1900. Harriet Little Woodruff's father was a prominent Bradford County lawyer, and his daughter was equally well-known in Towanda social affairs. The Woodruffs were Republicans and members of the Presbyterian Church. Eight-year-old Eleanor, an only child, was living with her parents and maternal aunt on Chestnut Street in Towanda in 1900, but for some reason can't be found in the 1910 census. In 1901, she was one of my paternal grandmother's piano students. According to The Motion Picture Studio Directories for 1919-1921, after public schools, Eleanor studied at the National School of Oratory in Philadelphia. According to the Encyclopedic Dictionary of Women in Early American Films, she joined a touring stock company in 1909 when she would have been about seventeen. The New York Dramatic Mirror identifies this as the Philadelphia Orpheum Stock Company, where she remained for a year and a half. The Encyclopedic Dictionary has her Broadway debut taking place in 1911 in The Five Frankfurters at the Thirty Ninth Street Theater. The April 1, 1916 Dramatic Mirror claims that her passion for the stage was opposed by her parents, but this writer finds nothing on which to base the assertion. A March, 1911 article in the Schenectady Gazette mentioned two plays she had been and was about to be in, they being Beverly of Graustark by George Barr McCutcheon and The Prince Chap. Her first film appearance, in 1913, was in the Pathe Pictures short The Finger of Fate. She was with New Jersey-based Pathe until early 1915 when she moved to Vitagraph. The Gazette article indicated she was "perhaps the youngest leading woman in America." According to Moving Picture World, while at Pathe, Eleanor was "one of the highest salaried stars in the moving picture business." In early August, 1913, she was injured while filming the movie Depth of Hate. The scene involved an auto accident, but the car failed to stop, and its front wheel when ran over her back, though it appears she was not severely nor permanently injured. While with Pathe Pictures, Eleanor engaged in what today would be called social welfare work. In November, 1914, she formed a "club" of young actresses in need of work during a difficult economic time, this effort being successful in finding jobs for some of the girls. Around the same time and shortly after World War I began in Europe, she had planned to suspend her career for a short time to go to France to be involved with the Red Cross, but an her mother's illness at least postponed then sailing. "I'm going to get that vacation," she remarked, "if I have to spend it in the picture theater on the corner looking at war pictorials while I knit socks for the Belgians." However, it appears she was involved in the Red Cross to some degree. As alluded to above, Eleanor left Pathe Pictures for Vitagraph in late 1914. It would appear from this that she made fifteen pictures with the former company and ten with the latter. While with Pathe, she appeared in The Stain with the famous vamp Theda Bara, this being Bara's first film, the now-famous sex symbol being simply an extra with lower billing than Eleanor. Perhaps her most famous venture while at Pathe was the serial The Perils of Pauline with Pearl White. Five of her Pathe films included Irving Cummings who went on to have a very impressive career as a director from the early 1920s to the mid 1940s. Eleanor's first film with Vitagraph was West Wind in September, 1915 which was filmed in Texas. Eleanor appeared on the cover of the Dramatic Mirror at least a couple of times, and when she did so in June, 1915, the magazine commented there were "few leading women who surpass (her) in charm or ability." In 1916, she left the movies for the stage once again, playing Otis Skinner's leading lady in Booth Tarkington's Mister Antonio. Though she appeared in one last film, A Pasteboard Crown in 1922, the last days of her career were spent on the stage both in the United States and Europe. Among other plays throughout the 1920s, Eleanor appeared in Six Characters in Search of an Author, the London production of George M. Cohan's So This Is London and Back to Methuselah by George Bernard Shaw. She last appeared in Somerset Maugham's The Breadwinner in 1931, the same year in which she married Dorsey Richardson, banker and later economic advisor to both Presidents Kennedy and Johnson. Her last days were spent in Republican political work and operating an interior decorating business in Princeton, New Jersey. Long a hobbyist in this line, in 1926, she decorated the Queen's suite at New York's Ambassador Hotel in preparation for a visit by Queen Marie of Rumania. She died in Princeton on October 7, 1980.
Share onTwitter Share onFacebook Which celebrites shareYour Birthday