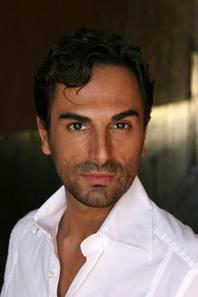 Fabrizio Imas is a man of the arts. Born in Torino, Italia, he grew up an only child in a white-collar family. His father ran the family-owned hardware factory, and his mother worked from home, raising Fabrizio and tending to the home. Early in life, Fabrizio acquired a fiery passion for the arts. He attended an artistic high school, Academia Albertenia of the Arts in Torino, where he fostered his creative skills in stage design. His love for the arts continued with his painting, multimedia creations - heavily influenced by pop art and culture. At fifteen, Fabrizio's modeling career began with the Italian national campaign of "Blue Spirit," which took him around the world, working with Italy's most prominent designers and photographers. In 2000, he moved to New York to continue his modeling. After his first performance with AMC's "Flash-Frame," he moved to Hollywood to continue building his acting career studying at the Lee Strasberg Institute. His portfolio of national and international commercial campaigns includes clients like VISA, 1-800-Dentist, and Johnny Walker. Fabrizio expanded his acting ability and branched out into theater in a romantic comedy Lola Goes to Roma, written and directed by Sundance award-winner Josefina Lopez. Josefina was so captivated by Fabrizio's talent that she cast him in her next movie, Baby Boom (2005), a winner at the Los Angeles Film Festival. He was offered a role in the Aundre Johnson movie 4 1/4 (2005), which was viewed at film festivals around the world including Palm Springs, Barcelona, and Capri. Additional work of Fabrizio's include co-starring in Madonna's controversial music video American Life directed by Jonas Åkerlund, leading roles in Passions (1999), Days of Our Lives (1965) (daytime drama) and The Comeback (2005) with Lisa Kudrow, directed by Michael Patrick King.
Share onTwitter Share onFacebook Which celebrites shareYour Birthday