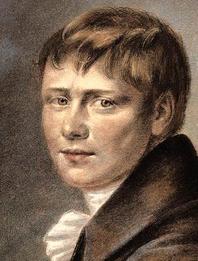 Heinrich von Kleist was born on the 18th of October, 1777 in Frankfurt/Oder (Germany) as the son of a priest. His father died when Heinrich was 11 so he had to earn some money early. He managed to go to the High School until 15, but was forced then to join the Prussian army in their war in the west. He climbed up the ranks until he was lieutenant, but quit then in 1799 and studied philosophy, physics, mathematics and political sciences in the town where he was born. After stays at Weimar (where Kleist met Wieland, Goethe and Schiller, other famous writers of his time), he finally entered the Prussian state as a secretary. His writings were no success at all, political life was not satisfying, and his girlfriend was ill, going to die- after all, he decided to go with her. They both met their death together, using a gun on the 21st of November, 1811 (Kleist was, as you can see, only 34). It is rather difficult to describe Kleist's role in German literature. He wrote immortal pieces of literature, such as "Prinz Friedrich von Homburg". But especially this stage play, for which he is best known, was often used as a nationalist piece of propaganda. Kleist does not belong to any literary epoch at all, but stays between the Romantik, the Klassik and the upcoming Realismus. Often underrated, Kleist was a walker between the lines. Seen in this context, his death is nothing but consequent.
Share onTwitter Share onFacebook Which celebrites shareYour Birthday