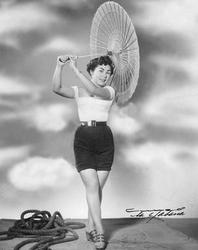 Chinese-Cuban singer and actress who started her career in the late 1940s in Havana radio stations and became a pioneer of Cuban television in 1952. Her parents were Oneida Rios, born in Cuba, and Chinese immigrant Andres Li (Lee) born in Canton, China. Hilda's exquisite mezzo-soprano voice and her exotic good looks made her a favorite of Cuban audiences and she was often a featured vocalist in famous composer Ernesto Lecuona's recitals. Extremely versatile, Miss Lee also appeared in comedy, both on television and on stage. In 1960, on the wake of the Cuban revolution and the institution of a Communist dictatorship in the island, Hilda moved to New York City. A year later she married Cuban musician Felipe Dulzaides, with whom she had a son. Starting as an unknown in the Big Apple, Miss Lee managed to relaunch her career performing in Spanish television broadcasts, on stages, and night clubs for over 26 years until her retirement.
Share onTwitter Share onFacebook Which celebrites shareYour Birthday