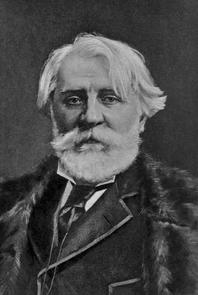 Ivan Turgenev was born into a wealthy landowning family with many serfs, in the city of Oryol in Southern Russia. His father, a cavalry colonel, died when he was 15, and he was raised by his abusive mother, who ruled her 5000 serfs ruthlessly with a whip. He never married, but fathered a daughter with one of their family serfs. Turgenev studied at Universities of Moscow, St. Petersburg, and Berlin, and later in his life received a Doctorate degree from Oxford. Turgenev lived in Western Europe for most of his life and admired the advancements of the Western civilization. He advocated modernization of Russia and liberation of serfs. In "A Sportsman's Sketches" (1852) he bitterly criticized serfdom, and in "A Nest of Nobles" (1859), and "On the Eve" he focused on the social and political troubles brewing in Russia. In his masterpiece "Fathers and Sons" (1862) Turgenev presented a man of the new generation, an educated and open-minded medical student Basarov, in a conflict with the old generation of 'fathers', who are standing for the ultra-conservative Russia. After being wildly attacked by Russian critics, Turgenev retired in Europe, living in Baden-Baden and Paris where he had a life-long affair with the celebrated singer Pauline Garcia-Viardot. His late stories "First Love", "Asya", "Torrents of Spring", and a collection of "Poetry in Prose" are among the finest in all of the Russian literature. He died in Bougival, near Paris, and was buried in St. Petersburg, Russia. Turgenev's influence may be found in Western literature; in the works of Gustave Flaubert, and also Ernest Hemingway, who regarded "A Sportsman's Sketches" as his favorite book. .
Share onTwitter Share onFacebook Which celebrites shareYour Birthday