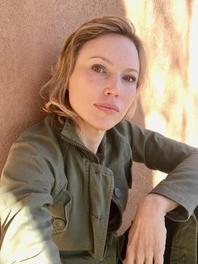 Actress Jenny Gabrielle plays Desiree Steed, the loyal wife of an embattled firefighter (James Badge Dale) in director Joseph Kosinski's soon-to-be-released Only the Brave, a gripping dramatization of the events surrounding the infamous Yarnell, Arizona fire that claimed the lives of 19 firefighters, and which also stars Jennifer Connelly, Josh Brolin, Taylor Kitsch, Miles Teller and Jeff Bridges. She also stars in the upcoming Lifetime Original Movie Be My Baby, playing a vengeful and conflicted mother, determined to get her baby back at all costs. Born in Stuttgart, Germany. Gabrielle moved to Los Alamos, New Mexico when she was three, where her father was a civilian scientist working for the nuclear industry. An only child and self-confessed bookworm, she claims her performance as the "Whirlwind," at age 10, in a local New Mexico stage production of The Wizard of Oz, inspired her to pursue acting. She was later accepted at the Interlochen Arts Academy (a prestigious school that holds auditions for Julliard), after which she decided to pursue ambitious travel plans that took her to Santa Fe, Ireland, Scotland, Germany, Spain and France. Returning to the US, she began formal actor training, studying with Eric Morris, who founded his own theory of acting based on the works of Lee Strasberg and Martin Landau. She soon won her first role - a significant one - as Blue, a starry-eyed ingénue in Henry Jaglom's Festival in Cannes, a comedic look at Hollywood, which also starred Anouk Aimée, Greta Scacchi, Maximilian Schell and Ron Silver. Shortly thereafter, she won a small part as young Angie Dickinson in Joel Zwick's comedy Elvis Has Left the Building, working in a cast that included Kim Basinger, John Corbett and Annie Potts. In television, she co-starred as controversial free spirit Dorothy Norman, opposite Joan Allen and Jeremy Irons in director Bob Balaban's biographical drama Georgia O'Keeffe. She's also proud of her performances in two recurring roles, on In Plain Site, as a desperate drug-addicted woman, trying to withdraw from drugs and a toxic relationship; and Easy Money, as the superficial ex-girlfriend. Her additional feature film credits include: Going Shopping (again for Jaglom), Dreamland, Employee of the Month, The Astronaut Farmer, Intervention, Hearts of Desire, The Lives of Angels, Spy School, Pecos Falls, Sweetwater, Force of Execution, Maze Runner: The Scorch Trials, Jane Got a Gun, and The Space Between Us. Her TV credits include the made-for-television films Seal Team Six: The Raid on Osama Bin Laden, The Sixth Gun and Outlaw Prophet: Warren Jeffs. When she isn't acting, Jenny writes, paints, and helps her scientist husband with his nano-technology research.
Share onTwitter Share onFacebook Which celebrites shareYour Birthday