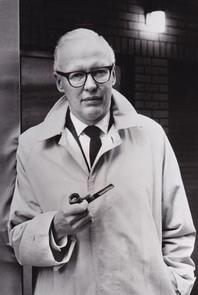 John Dann MacDonald was born on July 24, 1916, in Sharon, Pennsylvania. He served in the OSS in the far east during World War Two. While still in the military, he wrote a short story and mailed it home to his wife, simply for her entertainment. Unknown to him, she submitted it to the magazine "Story", and it was accepted. This launched a writing career that spanned more than 40 years. MacDonald is best known for the series of detective-style novels featuring Travis McGee, with an interesting twist on the usual hard-boiled character; McGee was NOT a licensed private investigator, and in most of the novels, he agrees to recover something of value for a friend or a friend of a friend; his fee is one-half the value of the object. MacDonald had enrolled in the Wharton School of Finance at the University of Pennsylvania, but dropped out during his sophomore year. He later completed his studies at Syracuse University, graduating in 1938, and in 1939 he received a Masters in Business Administration from Harvard University. While attending Syracuse, he met Dorothy Prentiss; they married in 1937. They had one son. At the age of 70, John D. MacDonald traveled to Milwaukee, Wisconsin, in December of 1986 to undergo heart surgery. He died at a hospital there on December 28th. He is buried in Milwaukee, at Holy Cross Cemetery and Mausoleum.
Share onTwitter Share onFacebook Which celebrites shareYour Birthday