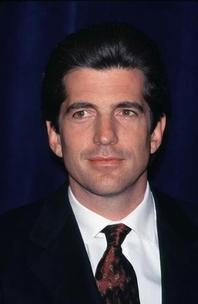 John Fitzgerald Kennedy Jr. was born on November 25, 1960, in Washington, DC, to John Fitzgerald Kennedy (President-to-be John F. Kennedy) and Jacqueline Lee Bouvier Kennedy (Jacqueline Kennedy). Three weeks before his birth, his father was elected President of the United States, and the nation loved little John. The press dubbed him "John-John", but his family called him John. Even as a toddler, he loved to fly. On his third birthday, his father was buried, and he was photographed giving his father's casket a salute in a photo and video seen around the world. About a month later, they moved out of the White House and into a 15-room apartment overlooking Central Park in New York City. He went to private schools. When he was six, his uncle Robert F. Kennedy was assassinated while running for president. He had been a father figure to John and his sister, Caroline Kennedy, a fact that Ethel Kennedy -- who had nine children with RFK -- did not like. That same year, Jackie married Greek shipping magnate Aristotle Socrates (Ari) Onasis (Aristotle Onassis). He virtually played no part in John's life because John hardly saw him. Ari died in 1975. John went on to high school and then decided to go to Brown University in Rhode Island. He graduated and, after his mother said no to his becoming an actor, went to law school and became an assistant District Attorney. During this time, he dated a lot. Actresses Brooke Shields, Sharon Stone, Sarah Jessica Parker, Daryl Hannah and Amanda Peet, models Naomi Campbell, Janice Dickinson, Cindy Crawford and Kate Moss, Princess Stéphanie of Monaco and even singing superstar Madonna were among his girlfriends. In 1994, Jackie died of non-Hodgkin's lymphoma. In 1996, John married Carolyn Bessette-Kennedy on an island off Georgia. She was very shy, and that did not bode well because they were constantly being photographed. On July 16th, 1999, Carolyn and her sister Lauren, with John as pilot, took off in his plane for Martha's Vineyard, Massachusetts, to drop Lauren off, with John and Carolyn continuing onward to the Kennedy Compound for the wedding of his cousin Rory Kennedy (Robert's youngest daughter, born after RFK's death). It was foggy, and several miles off Martha's Vineyard, the plane crashed, killing all three of them. The bodies of the women were found near the wreckage, but John's body was found in the pilot's seat.
Share onTwitter Share onFacebook Which celebrites shareYour Birthday