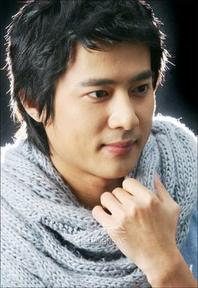 With his dark tall handsome looks and intense acting style, Ko Joo-Won is fast becoming one of the most recognizable and popular young actor to hit the small screens in Korea. Joo Won was born on October 16, 1981 in Gwangju. His birth name is Ko Young-Chul. He attended Sogang University. Joo-Won has gained recognition through his work on KBS dramas. His first KBS drama, Buhwal (aka Resurrection), was a success. However, he has gained a lot of recognition and popularity, starting with the KBS drama, The Bizarre Bunch (aka Peculiar Woman Peculiar Men). In it, he played Suk-Hyun, the rich, privileged son of a successful business woman who uncovers a deep dark family secret. For this role, he received praise and undue recognition. At the 2005 KBS drama awards, he and his co-star Kim Ah-Joong received the new/youth acting awards. In 2006, he starred in another popular and successful KBS drama, The Infamous Chill Sisters. In this drama, he played Il-Han, a sensitive, laid-back good guy torn between the love of two sisters.
Share onTwitter Share onFacebook Which celebrites shareYour Birthday