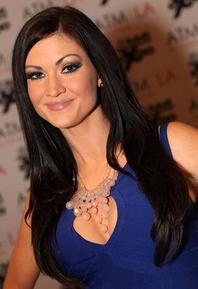 Tall (5'8"), buxom, and shapely brunette stunner Kendall Karson was born on March 28, 1988 in Sacramento, California. She's of mixed French, Dutch, Welsh, German, and Native American descent. The daughter of Baptist missionary parents, Karson grew up in a conservative Christian home and was a straight A student in grade school. Her first job was working at a Buckle clothing store. In addition, Kendall also worked as a mainstream fashion model, a dental assistant, a nationally certified pharmacy technician, a wireless and mobility information manager for a major energy company, and even was the CEO of her own gourmet cupcake company prior to her involvement in the adult entertainment industry in 2011. Among the top companies Karson has appeared in X-rated features for are Vivid, Wicked Pictures, New Sensations, Digital Playground, Zero Tolerance, and Pure Play Media. Moreover, Kendall has also worked for such adult websites as Twistys, Brazzers, and BangBros. She was nominated for an AVN Award for Best New Starlet in 2013.
Share onTwitter Share onFacebook Which celebrites shareYour Birthday