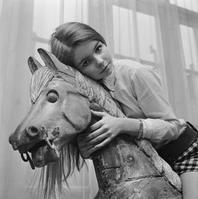 Lalla Ward born Sarah Ward, daughter of Lord Bangor - Edward Ward - and his writer wife, Marjorie Banks. She always wanted to act, paint and draw, and so joined the Central School of Speech and Drama in 1967. When she left in 1970, it was straight into a part in the Hammer film Vampire Circus (1972). Following this she worked extensively on stage, in films - including England Made Me (1973), Rosebud (1975) and The Prince and the Pauper (1977) (aka The Prince and the Pauper) - and on television - including appearances in Quiller: Thundersky (1975), Hazell: Hazell Meets the First Eleven (1978), Quiller: Thundersky (1975) and several episodes of The Duchess of Duke Street (1976). She also appeared in a film called Got It Made (1974), which was later reissued as "Sweet Virgin" with sex scenes added featuring other actors. This led to her winning a libel action against Club International magazine, which ran a selection of nude photographs from the film purporting to be of her. Her guest appearance in the Doctor Who story Doctor Who: The Armageddon Factor: Part One (1979) in 1979 led to her being chosen to play Romana when the original actress, Mary Tamm, left after one season. Ward quit Doctor Who in 1980, and in December of that year married Tom Baker. The marriage lasted 16 months. Ward continued to act, with roles in Schoolgirl Chums (1982) and Hamlet, Prince of Denmark (1980) for the BBC and "The Jeweller's Shop" and "The Rehearsal" on stage. She also developed her love of painting and wrote and illustrated several books. In 1992 she married eminent biologist Dr. Richard Dawkins, author of such books as "The Selfish Gene" and "The Blind Watchmaker", and gave up acting to concentrate on writing and on her family.
Share onTwitter Share onFacebook Which celebrites shareYour Birthday