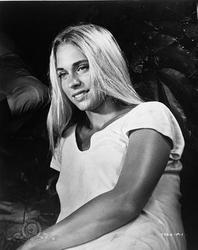 Tall, graceful and willowy, with a shapely, slender figure, lengthy straw blonde hair, very precise and delicate facial features, quite solid and capable acting skills, a bright, sunny, upbeat persona, and, most refreshingly, a strong, durable, take-charge attitude, the strikingly statuesque Margaret Markov made a potent and positive impression in a handful of TV shows and 1970s drive-in exploitation movies, in which she was usually cast as a very willful, resourceful and self-sufficient heroine. Born in Stockton, California in 1948, Markov's acting career began in 1969: she has a small uncredited bit part as a vacuous college coed in The Sterile Cuckoo (1969) and a much bigger and showier supporting role as a sweet, innocent teenage girl who runs afoul of a brutish biker gang in Jack Starrett's superior Run, Angel, Run! (1969). Markov went on to portray one of the titular sexy young ladies in Roger Vadim's Pretty Maids All in a Row (1971), then tackled a far better and meatier starring part in the exciting women-in-prison romp, The Hot Box (1972), where Markov truly shines as "Lynn Forrest", the most passionate and dedicated of a trio of beleaguered nurses who escape from a foul, dingy, hellish Filipino penitentiary and join forces with a band of jungle-dwelling guerrilla fighters, who are trying to overthrow their country's current fascistic government regime.
Share onTwitter Share onFacebook Which celebrites shareYour Birthday