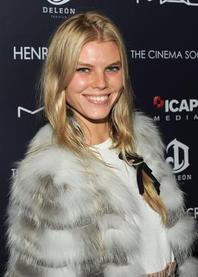 Belarus-born Maryna Linchuk is best known for her work as a Victoria's Secret lingerie model. She appeared in five Victoria's Secret Fashion shows--2008, 2009, 2010, 2011 and 2013. She has also appeared in campaigns for Escada, Versace, Dior, Donna Karen, Gap, Dolce & Gabbana, Massimo, Shiseido, Express and Blumarine, among others. Linchuk has graced the cover or been featured in many international fashion magazines, including "Vogue", "Numero", "Allure", "Harper's Bazaar", "Muse", "Glamour", "W" and "V", among others. She was born on September 4, 1987, in Minsk, Belarus, and was discovered while still in high school at age 16.
Share onTwitter Share onFacebook Which celebrites shareYour Birthday