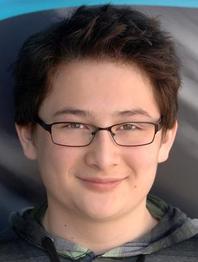 Matthew was born in West Hills, CA, in 2002, to an Asian mother (of Indonesian/Chinese descent), from Palembang, Indonesia originally and an American Caucasian father (of Scotch/Irish/German decent). Matthew grew up for the most part in the west San Fernando Valley area, in the suburbs of the great city of Los Angeles, CA. At the age of six, Matthew auditioned for and was accepted into the elite Young Actors Conservatory at Gary Spatz's: The Playground, in Beverly Hills, CA. Matthew had no acting experience at the time, only a dream to become an actor and/or singer/entertainer. Soon after starting acting school, and in the summer of 2009, at age seven, Matthew was recognized for his innate talent and gift of "making people laugh" at a Performance Showcase at The Playground and signed by a talent management company. Soon after this, Matthew landed his first agent representation, Abrams Artists (for commercial) and soon afterward began building his resume, with numerous student films, independent films and background work on TV shows, such as Ghost Whisperer (2005) and _Eastwick_. Matthew did his first lead in a commercial for Trek Livestrong Bicycles, in the winter of 2010, followed soon afterward, with a minor part in a Walmart commercial as a backup player. Matthew added to his resume, with a run of short films, shooting seven shorts in a span of eight months between June of 2010 and March of 2011. He added two independent feature film roles, one shot in December 2010 (The Guest House) and the other one (Two De Force) wrapping, in June 2011 and now in post-production, to be released sometime in early 2012. All of this hard work earned Matthew his first theatrical agent representation in early spring of 2010. Matthew graduated the two-year Kids Professional Program at Gary Spatz's: The Playground, in May, 2011. It was at that time that Matthew landed commercial/theatrical agent representation, with Coast to Coast Talent Group. Matthew is extremely grateful to all who have gotten him this far and very grateful to have worked with Coast to Coast Talent Group representing him theatrically and commercially, as well as William Morris Endeavor - WME - Los Angeles representing him for voice over, for several years up until 2015.
Share onTwitter Share onFacebook Which celebrites shareYour Birthday