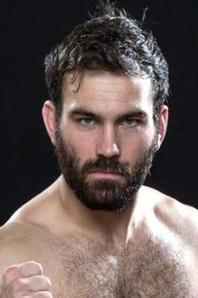 is an American professional wrestler and actor better known by his ring name David Starr. He is best known throughout the independent circuit in the Northeastern United States. David Starr began amateur wrestling in 1998 at the age of seven. He graduated from Abington High School in 2009 and is third all-time in wins at 92 career victories. He was top sixteen in NHSCA Senior Nationals, defeating state champions and state placers from Alaska, Utah, Florida, New Jersey, and California. Starr then went to Elizabethtown College and later transferred to West Chester University, where he was a NCWA National Qualifier at 157 pounds. Starr pays homage to his amateur career with the distinct tattoo on his right thigh of an adaptation of the USA Wrestling logo. Starr made his professional wrestling debut February 18, 2012, on the day before his 21st birthday. He made his debut after a month of training, the fastest graduate in the history of the Wild Samoan Pro Wrestling Training Center. He defeated his mentor Supreme Lee Great in that debut in front of a packed house for WXW C4. Starr would go on to feud with Supreme Lee Great, and after defeating him in a climatic battle at WXW C4 Sportsfest on July 21, 2012, Starr was welcomed into Supreme Lee Great's stable, the Culture of Charisma (also featuring "The Dynamic Sensation" August Wright and The Mastadon). Starr began expanding his territory and began competing for numerous independent promotions, including East Coast Pro Wrestling. Under the management of Supreme Lee Great, Starr won the annual Keystone Rumble. He is currently in a heated rivalry with former mentor and ECPW Keystone Heavyweight Champion Tommy Suede. Shortly after finishing production of the film Noah Starr was introduced to the Combat Zone Wrestling Academy by Shane Strickland and continued his wrestling education there under DJ Hyde and Adam Cole. Starr would go on to debut for CZW at Ascension on January 12, 2012, teaming with Latin Dragon versus Young Money. Starr has wrestled in Pennsylvania, West Virginia, Michigan, Virginia, Rhode Island, New Jersey, and New York.
Share onTwitter Share onFacebook Which celebrites shareYour Birthday