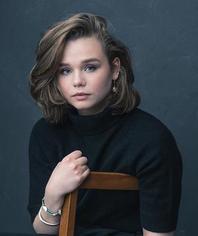 Niamh (pronounced "Neve") Wilson began her career while only in preschool. Only weeks after signing with an agent she landed a role in a Warner Bros. pilot, Chasing Alice, playing the title character as a young girl. While the pilot did not result in a series, the experience served Niamh well as she moved on to work in commercials, TV and film. The 2005 Lifetime TV original movie Haunting Sarah was Niamh's first challenging role. Director Ralph Hemecker remembered Niamh from his pilot, Chasing Alice, and cast her as a young girl haunted by the spirit of her cousin in this supernatural thriller. The result won Niamh a Best Supporting Actress in a MOW Young Artist Award in 2006 for Haunting Sarah. By the time she was in middle school she'd portrayed a ghost and an alien, been haunted, possessed, kidnapped and blown up. Over a decade of screen credits include Saw 3 through 6, The Marsh, and MOW such as Haunting Sarah (for which she won a Young Artist Award for best supporting Actress in a MOW at age eight) episodic appearances in Heartland, RookieBlue, Flashpoint, Falling Skies, Haven, My Babysitter is a Vampire,Warehouse 13, Hemlock Grove, Between, The Good Witch, the web series Inhuman Condition, and MOW Early Release. Comedic roles eluded Niamh until she landed the title role in Cookie Jar Entertainment's tween-oriented sitcom Debra! (for which she won a Young Artist Award for Best Performance in a TV Series - Leading Young Actress and Outstanding Young Ensemble in a TV Series in 2011.) Niamh takes a very craft-driven approach to her work, believing every member of the production team is critical to the final outcome of the project. Without the interconnection of talented crew and actors, her own efforts would not succeed. Her role as fame-hungry Gracie in Jean Pierre Jeunet's The Young and Prodigious T. S. Spivet was an exceptional opportunity to work with the celebrated French director. Her work in Spivet has garnered her a Young Artist Award for Best Supporting Film Actress. In 2013 she worked on David Cronenberg's Map to the Stars. She spent two seasons on the teen soap Degrassi, as Jack Jones. Niamh lives in Toronto, Ontario. She is known for her sarcastic wit and hard work; fluent in French, a devoted yogi, passionate dancer and vegan foodie.
Share onTwitter Share onFacebook Which celebrites shareYour Birthday