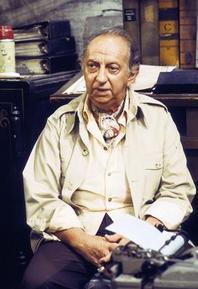 Phil Leeds is one of those for whom the phrase "character actor" was invented. A slight, wizened man with a rubbery face, bulging eyes and a Jimmy Durante-like nose, he excelled at playing weaselly little snitches, con artists, or just a neighborhood eccentric who always had something up his sleeve. Born in New York, his entrance into the "entertainment" business began with a job as a peanut vendor at the city's baseball stadiums, and from there, he began a stint as a stand-up comic in the "Borscht Belt" up in the Catskill Mountains, opening for many of the top acts of the day. He had a short career on the Broadway stage before entering the army during World War II, and upon his discharge, he resumed his stand-up career. Unfortunately, he got caught up in the McCarthy-era, anti-Communism hysteria in the early 1950s and found himself among many entertainers who were blacklisted, and it took him a while to work out of that. He appeared in his first film in 1969, a comedy, and from there on, his career was set. He had small roles in a good number of films, but he did a huge amount of television work starting in the mid-'50s, appearing in everything from sitcoms to westerns to cop shows.
Share onTwitter Share onFacebook Which celebrites shareYour Birthday