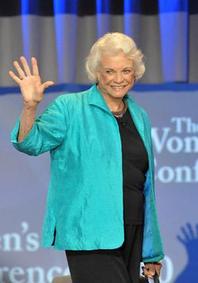 A mild-mannered jurist who thinks carefully before she speaks or makes decisions, Sandra Day O'Connor does not project the figure of a trailblazer. But she became exactly that. She was the daughter of cattle ranchers Henry Day and Ada Wilkey. She was a true child of the frontier, learning how to brand cattle and run a household on her parents' 155,000 acre ranch. She later wrote about her childhood in the autobiography "Lazy B: Growing up on a Cattle Ranch in the American Southwest." But when she became of school age, her parents sent her to El Paso to live with her maternal grandmother, Mamie Scott Wilkey, who she said had the greatest influence on her life. In school, she was a high achiever and graduated from high school at the age of 16, then she graduated from Stanford Law School third in a class of 102. Ironically, the valedictorian was future fellow Supreme Court Justice William Rehnquist, whom she briefly dated. She married in 1952 and sought work in major law firms. But women lawyers were a rarity in those days and she worked as a prosecutor in some county offices. She then established her own private practice in Phoenix in 1960, and became involved in Republican politics. In 1965, she was appointed Assistant Attorney General for the state of Arizona. Her life changed in 1969, when she was appointed to the Arizona state Senate to fill a vacant seat, and she was reelected. She was well-regarded by her colleagues and 1973, she became the first woman in the nation to become Majority Leader in an American state Senate. However, her passion was for law rather than politics and in 1975, she was elected Maricopa County Superior Court Judge. She served with distinction and in 1979, Democratic Governor Bruce Babbitt appointed her to the state Court of Appeals, in spite of her being a Republican. She served with distinction again and came to the attention of U.S. Senator Barry Goldwater, who regarded her very highly.
Share onTwitter Share onFacebook Which celebrites shareYour Birthday