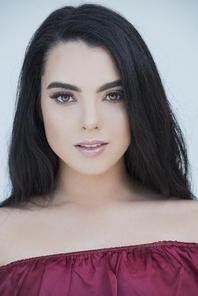 Scarlet Gruber was born on February 10, 1989 in Caracas, Venezuela. She is the daughter of Gabriel Fernandez, a famous Venezuelan actor and singer and Astrid Gruber, a recognized Venezuelan soap opera star. When she was eight years old she started her artistic journey training as a ballet dancer at the Miami City Ballet. She continued her training as a ballet, modern, jazz, and hip hop dancer when she was selected to attend the prestigious New World School of the Arts High School. Shortly after graduation, she began her acting studies focusing on the Sanford Meisner technique. She also studied intensively in a two month course by herself with Academy Award Nominated actress Adriana Barraza. Her hard work paid off as she scored successful roles in Spanish television such as "Cosita Linda" where she interpreted twin sisters. Her last starring role in the NBC Universal/Telemundo's award winning soap opera "Tierra de Reyes" earned her an award for Best Lead Actress. She recently traveled to Spain to shoot her latest film "Santiago Apostol." Other short films include, "El Tatuaje" and "Los Ocho." Her debut in Televisa is with her most recent telenovela is Sin tu Mirada with Claudia Martin and Osvaldo de Leon. She was nominated as best young actress in Premios Tvy Novelas in Mexico for that role.
Share onTwitter Share onFacebook Which celebrites shareYour Birthday