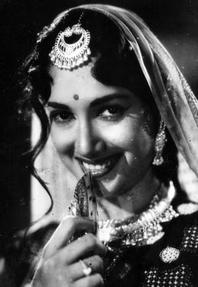 Shakila's was born as Badshah Begum on January 1, 1935 in the Middle East. Her younger sisters are Noor Jehan (nicknamed Noor) and Nasreen. Their ancestors belonged to the royal families of Afghanistan and Iran. Their paternal grandparents and mother were killed during family feuds over the throne. Their father and his sister Feroza Begum brought the children to Mumbai, India. Shakila and her sisters faced tough times, since their father died soon after. Her aunt, who was engaged to marry a prince, lost him in an accident, and she decided to remain unmarried and raise her three nieces. Her aunt was fond of movies and took the girls to showings. Their family friends with Kardar and Mehboob Khan. In fact, it was 'Kardar' who offered her the chance to act in Dastaan (1949). She took the name Shakila and made her debut as a child artiste in the film, which starred Suraiya. She quickly acted in another film with Suraiya titled Duniya (1949). After working in some routine films in secondary roles including Gumasta (1951), Sindbad the Sailor (1952), Rajrani Damyanti (1952), Aagosh (1953), Shahenshah (1953), Raj Mahal (1953), Armaan (1953), people finally noticed her in Guru Dutt's Aar-Paar (1954). In Aar-Paar, she played the other woman in Guru Dutt's life, the cabaret dancer, who is disdained by society and is a complex and embittered person. Aar-Paar was a superhit film and its best songs were picturized on Shakila. Her sister Noor also acted in Aar-Paar (1954) and later married famous comedian Johnny Walker and quit films, as did Nasreen, who became a housewife.
Share onTwitter Share onFacebook Which celebrites shareYour Birthday