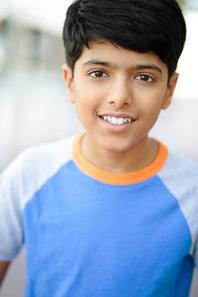 Sidd Munjal is an Indian-American actor known for his work in TV shows, films and commercials. Sidd was born on May 29th, 2005 in Los Angeles, California and his parents are both immigrants from India. He lives in the Los Angeles area with his parents and a younger sister Sana. He is raised bilingual, speaking both English and Hindi. Sidd started acting at the age of 10 and received coaching from known acting schools in Los Angeles and Hollywood . Sidd's acting career started with multiple short films and commercials to follow. He has appeared in TV show Stitchers, web series, commercials, films, and anti-smoking PSA for Indian Bollywood market. Sidd has been training for six years in Karate and has achieved Brown Belt. Sidd loves to play guitar and has been training for 2 years. Not the least, Sidd is enrolled in gifted program in school. He likes learning and excels in all the subjects. He also volunteers in school clubs and library. When not busy, Sidd enjoys reading, watching movies, playing basketball, dancing, swimming, spending time with friends and family. He has a passion to travel and learn about new cultures.
Share onTwitter Share onFacebook Which celebrites shareYour Birthday