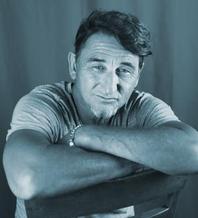 Stace has been working in the entertainment industry for over 25 years as an Actor, Writer and in various roles behind the scenes. After training at the National Theatre Drama School in Melbourne, Stace spent the 90's doing the rounds in fringe theatre before being picked up by the acclaimed Melbourne Theatre Company where he was working until he left for Sydney in the late 90's. He performed at the Playbox Theatre Company (Melbourne Theatre), playing the lead in "King Henry V" and "Night and Day", both directed by David Myles. Stace was the 6th Juror in the Carlton Courthouse's "Twelve Angry Men", directed by David Moore and played the lead role in "Game of Dolls" also at the Courthouse (directed by Elisa O'Brien). He played supporting roles in "Street Life" at La Mama Theatre and the Powerhouse Theatre - where he also performed in "A Majority of One", directed by Graeme Moore. Stace performed solo in "Feelings" and "Dancing Bears" at the Melbourne Festival - both written and directed by himself. He spent an 18 month period performing stand up comedy, solos and guest spots around Melbourne, often at the Universal Theatre, where he wrote, directed and performed his own work ("Quasimodo and the Elephant Man", "Billy and Joe"). Stace has worked behind the camera consistently in between gigs, as a production manager (Animal Planet, 3rd Leg, Northern NSW), producer, director and numerous other roles in the production process. His film credits include "Stark" and "Say A Little Prayer" and he has appeared in the ABC documentary drama, "Catalpa Rescue", Foxtel Crimestopper documentaries and in numerous TV series ("Phoenix", "The Flying Doctors", "Neighbours", "The Comedy Company"). As a writer, Stace co-wrote on the biography of Dr Charles Slack, the youngest assistant professor of Harvard University and was engaged as the main writer on the animation "The Meeting Pool", for Kahan Enterprises (Fox Studios) and Sir Ian McFarlane - who was gifted the book as a child by Grace Kelly. Due to his close association with her son Joe, Anne Deveson included Stace in her book "Tell Me You're Here" (which she also invited him to play a role in writing with her). Stace, with his partner Lisa, wrote the full feature screenplay, "Lennox" and the non-fiction, "Emotional Awakening" which was well received at the Byron Bay Writers Festival, 2016 and can be found in selected bookstores on the Northern Rivers and in Sydney. More recently, Stace has been enjoying occasional performances as a stand-up comedian, in Byron Bay, Sydney and the Gold Coast, whilst producing the screenplay "Lennox" - now moving into pre- production.
Share onTwitter Share onFacebook Which celebrites shareYour Birthday