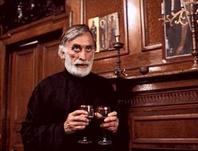 Stoycho Mazgalov Todorov is a Bulgarian theater and cinema actor. He was born on May 2, 1930 in the town of Lyubimets , Haskovo region, Bulgaria. He studied in the Higher Economic Institute in Sofia. Then he graduated in "acting" in National Academy for Theatre and Film Art, Sofia Bulgaria in 1954 in the class of Professor Nikolai Masalitinov. He had played in Pernik Drama Theater (1954-1955), in the Theater "Labor Front" (1955-1964), in the Theater "People's Stage" (1964-1966). He is one of the founders of the Theater " Tears and Laughter " and its Chief Manager from 1969 to 1983. In 1985, he had played in the National Theatre . He was a member of the Union of Bulgarian Filmmakers . He is a winner of the Order "Cyril and Methodius" - II, degree. He had played in 47 films , including the popular Bulgarian Song for man , King and General , Shibil , Eighth , Three Retired , Typhoons with Gentle names , War of the Hedgehogs , Han Asparuh and others. He is an author of the autobiographical book "When I am." At the time of his leadership Drama Theatr "Tears and Laughter" was perhaps the most interesting Sofia TheaterIt's a wonder he was Chief Manager for fourteen years (1969-1983) They must have cost him much, but he did not stop with a tenacity and cunning to do all that believed necessary and as if no thought for the consequences. It was externally strict and strong. He gathered around him smart and talented people and knew how to listen to their wise advice. But he knew that the responsibility has to carry personally. Impressive was his civil courage in times when it was a rare and dangerous. It was glamorous actor; he was playing always one of us. For him, theater was calling, and destiny - both looking very serious. He died on November 1, 2006 in Sofia, Bulgaria.
Share onTwitter Share onFacebook Which celebrites shareYour Birthday