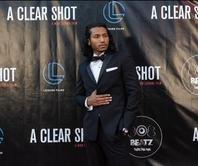 Actor Tony Dew was born Tony N Do on April 27, 1992 in Rahway, New Jersey. The oldest of 4, His mother Trang Smith is a food service worker and a nail technician as for his father, Tran Smith, a forklift operator and delivery man for Plainfield Fruit Produce. His mother, half Vietnamese and half African American while his father, half Vietnamese and half Irish. Tony and his family lived in Elizabeth for 14 years where he'd spent the weekends and summers living with his grandmother Chao Do in Jersey City, New Jersey. There he spent his time working at his grandmother's movie store called "Chao Videos" which was down the street from the competition; Blockbusters. It was through that job that he fell in love with motion pictures. Memorizing punch lines from his favorite films like "Alrighty then" from Jim Carrey's "Ace Ventura" and "yeah baby yeah" from "Austin Powers". He'd take his charisma to school the following week and was Labeled "A Class Act and voted "Most rambunctious" throughout middle school. At 15 his family moved to Edison, NJ where he attended John P. Stevens High School. A most prestigious school known for their academic achievements. There he dabbled in many clubs and sports, all but theatre. During this stage in life, Tony made a decision to postponed a career in Acting to secure a practical job, "A State job" as his mother insisted. Right out of high school he planned to join the service and then become a firemen. At 18 with two months away from graduation his father passes away from liver disease. Now man of the house and forced to stay close to home, Tony attended Middlesex County College where he studied Fire Science. At 20 he volunteered at the local fire house. (Station 6, Engine 8). Over the next three years Tony spent his days volunteering at the fire department in the mornings while bartending and serving at local bars at night. At 23 Tony decided to stop and go back to pursuing his love for Acting. Conveniently, he had a buddy living in San Diego that needed a roommate for the year. He packed everything and moved to Rolando, SD the summer of 2015. There he worked as a waiter in the Gaslamp District at a sports bar called "The Crazy Goose" and on his days off he would travel to Los Angeles to learn about the Acting business. At 24 Tony moved to LA. Finally in the city of angels, Tony signed up for LA Casting and a handful of background agencies where he worked in between shifts from the hospitality business for 2 years before securing a lead role in his first feature film "A Clear Shot" by Nick Leisure. Set to Release July 13th, 2019 at the Esquire imax theatre in Sacramento. Tony continues to work as an Actor to this day.
Share onTwitter Share onFacebook Which celebrites shareYour Birthday