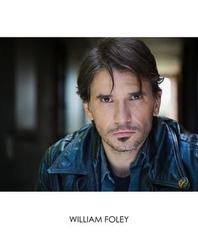 Having been called 'a creature of the stage' by an influential man who knew of such things, William has been acting professionally for almost 20 years. In 1995 he graduated with honours from the Dawson College Professional Theatre Program (The Dome Theatre) in Montreal and began working immediately. He's had the honour of tackling some of the greatest roles in theatre as well as (let's be honest here) some characters in some plays that were rightly forgotten immediately. From Richard III to Iago to Oberon, Belch and Mercutio his resume is admittedly a little 'Shakespeare-heavy', but he assures you that he can still 'talk all modern, yo'. William's love of the stage and penchant for whim and vagabonding has taken a toll on the 'Film and TV' section of his resume. However, after many years of bumping back and forth across this continent, William has finally settled in Toronto to bring that section up to speed once and for all. Before arriving in Toronto he had gained a lot of on-set experience with several leads in short films and a lot of stand-in and SOC work when he was beginning in the late 90s. Since arriving in Toronto he's landed a number of lead and co-starring roles and is eager for many more. William is a character driven performer who's choices and offerings have had several directors comment that he's taken scenes down interesting paths they hadn't considered. Paths that end up in the final cut. William thrives on direction and knows his place as an actor, and when the door is open for collaboration, his creativity and imagination seem to make directors take note. He is an easy-going person by nature who gets along easily with most folks. Among his many accomplishments on stage, one of his proudest achievements is the ongoing growth and success of a show he helped create at Shakespeare by the Sea in 2005. As co-writer of the ever-evolving, ever-growing Robin Hood: The Legendary Musical Comedy his writing skills took a co-pilot position to his acting skills. The most recent incarnation at Hart House Theatre in 2013 was the most spectacular yet. Garnering a trove of accolades (Glenn Sumi: "NNNN ...the biggest theatrical surprise of 2013 has been this pee-your-pants-funny musical...". Mooney on Theatre: "It is so consistently outstanding in almost every regard..." ) and more importantly an endless wealth of laughter and applause, it's made William realize, after many years, he's also a writer. Within the next 6 months or so, some of his writing will be made available on a You Tube channel tentatively called 'Billy & Friends'. Stay tuned, there's much more to come from William.
Share onTwitter Share onFacebook Which celebrites shareYour Birthday