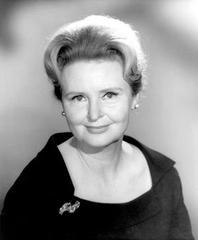 Born in Wichita Falls, Texas, and was raised in Berkeley, California, she attended/graduated at The Pasadena Community Playhouse where her major was acting, and she pursued her career immediately. The Emmy Award nominee who has played Alice Horton for the entire 37 years that Days of Our Lives has been on the air, is daytime's television's most beloved mother, grandmother and great-grandmother. As one of the two remaining original cast members, she is indisputably one of the most revered veterans in soap opera history. She has won the Soap Opera Digest Award for Outstanding Actress/Mature Role in 1978, 1979, 1984 and 1985, and was nominated for an Emmy for Outstanding Lead Actress in a Drama Series in 1986-87, and for Outstanding Supporting Actress in a Drama Series in 1978-79. It should come as a surprise that many longtime fans that watched Days who knew her as Alice that Frances had an accomplished acting career prior to her debut on November 8, 1965. Her Broadway appearances include Hamlet with Maurice Evans, Cyrano de Bergerac with Jose Ferrer, Twelfth Night and a Theater Hill production of The Rivals with Mary Boland. Her first radio job was at NBC as Ann Rutledge in Prologue To Glory, which was followed by her role of Mrs. Moonlight in Mrs. Moonlight and Charlotte Corday in Charlotte Corday. Little did she know at that time how the name Corday was to play an important role in her life. Her television credits include "The Eleventh Hour," "Little Mister," "Wagon Train," and the movie-of-the-week, "Mercy Or Murder?"
Share onTwitter Share onFacebook Which celebrites shareYour Birthday