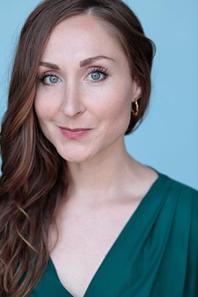 Rebekah Wiggins was born in Frankfurt, Germany, but spent her childhood in Roswell and Santa Fe, New Mexico. Even as a child, Rebekah excelled at everything creative, from playing the guitar, singing, and dancing, to drawing, acting, and writing poetry. Over the years, she has pursued these diverse talents: she holds associate's degrees in commercial music and audio engineering and has a certificate in film technology. Rebekah has always been particularly fascinated with films and acting, and over the years has proven herself a versatile actor and producer. In 2008, Rebekah and writer/director Hannah Macpherson created Heatstroke Productions, which has since released multiple award- winning short films as well as the popular web series Date Doctor TV (2010). The team's first short film, Down the Road (2008), starred Rebekah as a charming backwoods girl caught in limbo. For this role, Rebekah won the Best Female Actor at the 48-Hour Film Festival in New Mexico. She won this award again in 2011 for her performance as a paraplegic in Heatstroke Productions' short film suspense-thriller Drain. In that same year, the production company's Click. Flash. swept up awards in the 2011 National Film Challenge, winning the Audience Award and Best Directing Award, with Rebekah taking the award for Best Acting -Female Lead. In 2007, Rebekah was cast in the heartwarming indie film Sunshine Cleaning (2008), playing an enthusiastic baby-shower host opposite Amy Adams. She next booked a role as a lesbian schoolteacher opposite Kelsey Grammer in the comedy Swing Vote (2008), followed by a part in Jim Sheridan's acclaimed Brothers (2009). In 2009, Rebekah was cast in Matt Reeves' dark remake Let Me In (2010). This was soon followed by Fright Night (2011), 10 Years (2011), and Sundance selection The Rambler (2013). She also played a role in the hit television series In Plain Sight (2011), while receiving rave reviews locally for her performances in The Show, a Second City-style improv team. Most recently, Rebekah can be seen as a gentle veterinarian in the indie film Dark Around the Stars (2014), as a city clerk in the popular online comedy series Overlook, NM (2013- ), and in the TV series The Night Shift (2014) and Killer Women (2014). Her upcoming projects include the psychological thriller Those Who Wait (2014), which she co-produced/starred in, and WGN America's Manhattan as Gladys.
Share onTwitter Share onFacebook Which celebrites shareYour Birthday